“So, what in the world is pickleball, and how do I play it?” This is a question that many may be asking themselves as the sport with a strange name continues to gain popularity and adoration from those who play it. Pickleball is an excellent game that almost anyone can play with just a bit of guidance. That is what we are here for, to help and guide you in learning more about the game of pickleball! Stay tuned in this article for a brief history of the sport, where to play, how to play, the gear needed to play, and, some would say most importantly, what to wear when you play. Who knows, pickleball might become your new favorite sport!

While games such as golf and tennis have been played for hundreds of years, pickleball is a very young sport in terms of history. Pickleball was created in 1965 in Washington State. There is still a great debate on how the name came about but, alas, pickleball was born in the backyard of a couple named Joel and Joan Pritchard from Seattle, Washington. After a conversation with his father where Joel was complaining that there weren’t nearly enough things to do around their neighborhood, his father suggested he simply make his own game up. After much trial and error, several tools tested that were found around the yard and home, and much trial and error, the sport was eventually perfected. Pickleball was officially born.


Where Do You Play? There are several options available to you for a game of pickleball. Pickleball courts are much smaller than standard courts for games such as tennis. Four full-sized pickleball courts are able to fit onto one tennis court. When a tennis court is used, the tennis court itself is not permanently affected by the addition of a pickleball setup. The smaller net for pickleball can be set up at the beginning of a match and removed at the end of the match. Pickleball can be played on both indoor and outdoor courts. Due to the flexibility of setting up and taking down the gear needed for pickleball, many facilities that typically offer tennis or badminton are now offering the option to play pickleball as well. We definitely recommend contacting your local tennis club or facility to inquire if they are offering pickleball now as an added option next time you are up for a match.

There are pickleball-centered social gathering spots popping up around the country too that you might want to check out or scope out a similar venue in your area. You can grab a beer and a bite to eat and rally the troops for a friendly match at places like these: 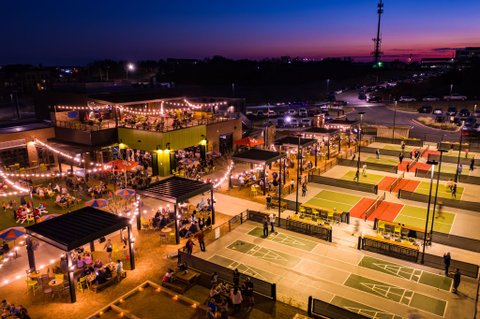 If you find yourself on vacation and are interested in playing a game of pickleball, there are several resorts that also now offer their guests the opportunity to play pickleball while they are enjoying their time there. There are resorts and establishments that offer pickleball from the beaches of Los Cabos all the way to the red rocks of Arizona and from the heartland of Oklahoma to coasts of Massachusetts. Some of the resorts that offer this include: How to Play Pickleball

Before you begin playing pickleball, you will need the correct gear for it. Each player will need their own paddle, tennis shoes, a net that is set up on a court, and a ball. That is all you need for a game of pickleball, which is very similar to the gear needed for a tennis match. For the shoes you wear, it is very important to choose tennis shoes that offer great traction on the court. The Asics Gel-Resolution 8, or shoes that are similar, are a great choice to wear for pickleball. There are several aspects of pickleball that are very similar to tennis. however, there are a few ways in which pickleball is different from tennis. Unlike tennis, pickleball balls are served underhanded with a paddle. This is done at the baseline. It is served on a diagonal towards the other side of the court on the opposite side. Also, unlike tennis, you can only score a point if you are the side that is currently serving. Each side will volley back and forth until one side either misses the ball, or the ball double bounces. USA Pickleball, has published its full Official Rulebook if you are interested in a more in-depth explanation of the rules of pickleball.

Much like tennis, etiquette is also extremely important when playing pickleball. One should always exercise the utmost respect for players no matter if they are spectators or actually playing themselves. Our Beginners Guide To Pickleball: Pickleball Etiquette should be able to help you with the full etiquette that is expected for those both playing or watching pickleball games.

What Do You Wear?

Now that you have learned about it for the first time, or become more familiar with the game of pickleball, we can also help you with the important question of what to wear during gameplay. The great news is that with pickleball, you will simply dress as if you are headed to play a tennis match. With that, there are several options available to you. A great option to wear if tennis dresses are more to your taste is the Heat White Stripe Dress which will keep you stylish while out on the court.

If you prefer to wear a two-piece outfit on the courts, there are plenty of options available for you as well like this (pictured left) quick-drying Roxanne Sleeveless Polo Top paired with the Stella White Skort work together perfectly to create a stunning outfit with a small pop of color.

If you find the weather to be a bit chilly, the Boyfriend Pullover in White is an excellent option to help keep you warm during the cooler months. It can also be taken along to put on after a match if you have plans afterward.

Overall, pickleball seems to be skyrocketing in popularity as many discover a new game that they love to play. Hopefully, this article has given you a great head start if you are interested in learning to play this game or just wanted to know a little bit more after hearing all the fuss about this exciting new trend. This is a game for all ages and is a healthy way to burn some energy and socialize with friends. Our goal for you on your first match is to have the best time possible and as always, your SwingDish Squad is always rooting for you.